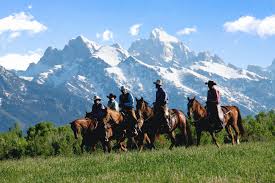 Why should he even seek a vision these days? He was seventeen now , enjoying his job on the ranch, and maybe he would have his own ranch someday. Yet every day, at the breakfast table, his father asked him to consider it. “Dad, you work in a bank!” “What good has your vision done for you?!” He knew he was raising his voice, and needed to cool it. Besides that, his mother gave him one of those, “You better knock it off”, kind of looks, as she stood over him with the frying pan, putting eggs on his plate. Johnny looked at his father and said calmly, “Dad, we might as well all be Christians”.

“Son!” His father was raising his voice now, “We are Christians!” “Just because we practice the traditions of our people doesn’t mean we don’t believe in God”. He knew his father hated this part of the conversation. No one said anything, as they ate their eggs, beef bacon, and toast with lots of butter. To top it off, was his Mom’s coffee, some of the best he had ever tasted.

His father finished eating first, and made one more comment as he was getting up from the table. “You need to think about the spiritual side, son – and you need to be connected with the people”. Johnny said nothing, but he finished, thanked his Mom, and headed out the door.

As he was driving to work that morning, he glanced over at the mountains. They had been calling him for a while now, he just wasn’t telling anybody. He didn’t see the need for the supernatural, not these days. It was all about working and making money. Ok, and besides that there were girls, and maybe getting married, but there just wasn’t a need for the traditions, or to “hear from the heavens” as some put it.

Driving the old pick up into the gravel lane of the ranch, for some reason made him think of his Grandfather. He had been a medicine man, who was loved and respected by all the people. He also hated their last name of Caldwell, and he refused to use it. He was Bear Medicine, and would not accept any other name. He also refused to call Johnny anything other than the name he came up with…..what was it……it was…..something to do with a hawk but he could not remember.

As he parked the truck and jumped out, he decided he would ask for some time off to go on the vision quest. If his boss said yes, he would go, and if not – then so be it. He had a good day at work, feeding several herds out on the range using an ATV. When he did finish for the day, he asked his boss for the time off, and explained why. His boss said yes, and the same thing his father had said earlier, “You need to be more connected with the people…”. Johnny laughed and told him he sounded like his father. Privately though he was starting to get the point.

A day later, he knew it was crazy, but he was in the mountains. It was only early spring, so it was still cold. His father had insisted on a buffalo lodge, instead of a nylon tent. They had a small one, and he would be able to build a fire in it, and would be warm. It took him hours by foot, to get about half way up Cougar’s Paw Mountain, where he found a good spot that was open, but bordered by pine trees. The trees would protect him from the wind. There was no sense in going any higher, it would be too cold there anyway. And the view from here of the valley, was spectacular.

After he had set up the lodge, he wasn’t really sure what he was supposed to do, other than pray, and fast. He would be drinking water and that’s all. He sat in front of the lodge and just took in the view. He was feeling calm already. There was a presence here…..what was it? He could sense it – he just didn’t know what it was. Was he sensing the earth like his Grandfather had talked about? He took several deep breaths, and could hear his heart beating…….or was it…… drums he was hearing?

The conclusion of The Seeker, very soon!

images from google except where noted

3 thoughts on “The Seeker”