Did you know that it can take bees as many as 5,000 trips to flowers, to produce 1 teaspoon of honey? Bees are fascinating creatures, and a lot has been written about them, so this is just a brief overview. There are more than 20,000 species of bees but only a small number of them are classified as true honey bees, and are under the genus of Apis. The study of honey bees is known as apiology.

Most know that honey bees live in colonies. There can be hundreds of thousands of bees in a single colony, with three different types of bees living there. The male bees are known as drones. They are produced from unfertilized eggs so they only have the DNA of the queen. Apparently the queen is able selectively choose which eggs to fertilize. Drones are large, with large eyes, used to locate queens during mating flights. Two interesting points about drones are that they have no stinger, and they die during the process of mating.

The worker bees are female, with two sets of chromosomes. In addition to each hive having a huge number of worker bees, the workers do different jobs according to their age! I found this fascinating. They go from cleaning their own cell, to feeding larvae, to receiving nectar and cleaning the hive, to guarding the hive, and finally they forage for pollen and nectar. Some workers have specialties such as being an undertaker! Their job is to remove dead bees from the hive. Cool! By the way the workers are the bees that sting you or I, and then they die. The reason is that their stinger is barbed, or has ridges. So it actually gets stuck in the person or animal. The injury the bee receives, 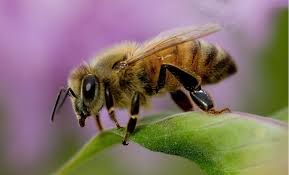 Of course the queen bee’s job is to lay eggs after mating. She lays a lot of eggs, about 2,000 in a single day. Her stinger is not barbed and so she can sting multiple times. She does not mate with the drones from her own colony.

Oh, one more thing, one of the main enemies of the honey bee is the wasp. Why? Because wasps are carnivorous and they eat bees! Honey bees only eat pollen, and the honey they make. I’ll probably do another posting, sometime in the future, on how the honey is actually made.